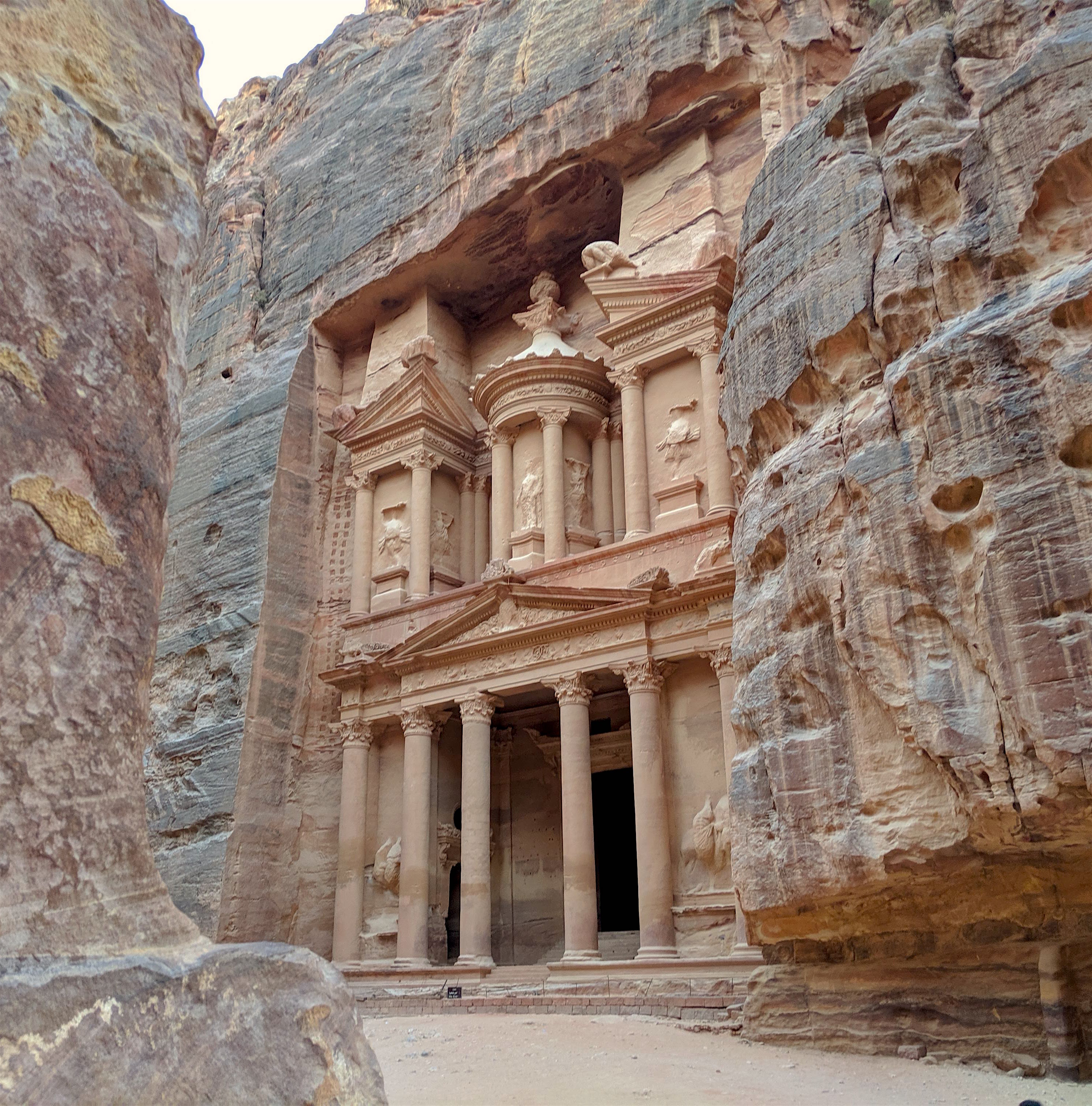 There were essentially two reasons we decided to extend our trip to include Jordan, the Petra archaeological site and a night’s stargazing in the Wadi Rum desert, and let me tell you they were definitely worth it.

Currency: JOD (Jordanian Dinar)
Why to go: Petra & Wadi Rum
Where to stay: 5* hotels (cheap comparative to western Europe)
How long to stay: 3 nights to not pay anything at the Wadi Arab border when crossing from Israel
Transport: Taxi
Go with: A partner or friend
Food: Disappointing but I mostly had hotel food to be fair

Why go to southern Jordan

I combined seeing southern Jordan with a trip from Tel Aviv to southern Israel I did with a friend. In Eilat, Israel there is a border with Jordan which is conveniently positioned to allow you to visit the most well known tourist attractions in the country. Click here to learn more about what to expect at the border. The border is around a fifteen minute drive from Aqaba (opposite Israel’s Eilat), a two hour drive to Petra, and around a one hour drive to the Wadi Rum desert. There were essentially two reasons we decided to extend our trip to include Jordan, the Petra archaeological site and a night’s stargazing in the Wadi Rum desert, and let me tell you they were definitely worth it.

Where to visit in southern Jordan

We crossed into Jordan from Israel around midday. After two hours driving to Petra, we arrived at our hotel at 2pm. The transport from the hotel to the archaeological site had already left and Khaled, who drove us to Petra, offered us a deal to drive us to and from Petra and to Wadi Rum the following day, allowing us to get straight to the site to make the most of our time. We didn’t go to the site prepared at all. We did not have enough water or any food and had bought Petra by night tickets before going in. We ended up staying at the site for around five and a half hours. The plan had originally been to return to the hotel or to eat something next to the site and go back for Petra by night. However, as closing time for Petra by night came and the crowds thinned, we didn’t want to miss the best time to roam around the site. Although the famous instagram photo is of the treasury at Petra, I urge you to walk around more. There are so many stunning structures and the site is huge. Walking beyond the treasury also leaves behind the tourist fanfare which I frankly found annoying.

Petra by night is very much a tourist trap. You walk the same path to the treasury (the first structure at the site) lit up by candles in paper bags only to sit down in front of the treasury lit up in various colours for 20-30 minutes. The event consists of a story by candlelight and some music played all whilst you sip on a small glass of tea. I’m not saying don’t go but I just think Petra is much more than this. There was no roaming around and seeing different structures lit up. Also, it was very cold, bring a jumper if you are going!

Wadi Rum became our desert stay destination thanks to my friend’s research. She had found a bubble hotel online and it became what she was looking forward to the most out of the trip. I had never stayed the night in a desert before but being in the middle of nowhere with minimal light pollution means you get a beautiful view of the night sky, the main attraction in my opinion. The hotel offered stargazing which we took advantage of, following which we just sat and stared at the stars on our bubble patio. It was a very romantic setting, hence most of our fellow travellers were couples. Although we decided we weren’t that fussed, the hotels in the desert also offer tours around the place to see various sites.

Aqaba wasn’t really an intended destination. We always knew that on the fourth day we were going to have to get a bus from Eilat and travel the five hour trip back to Tel Aviv. As such, the decision was to either stay the night in Eilat or Aqaba and set off in the morning. We decided to spend the night in Aqaba for two reasons: the hotels are cheaper than Eilat and if we stayed three nights in Jordan we saved 10 JOD each in exit fees at the Jordanian side of the border. Following our night in the desert, we got a car to Aqaba and had a relaxed beach and pool day. Rumour had it that easyJet is going to start direct flights to Aqaba, and I see why, the beaches were pleasant and for a cheap 5* stay with a nice beach, it worked well.

How long to stay in southern Jordan

This will differ depending on how you entered Jordan. If you are doing an extended full country tour of Jordan, you may want to stay longer and explore additional archaeological sites. However, my friend and I had limited time to explore southern Jordan and we found that three nights was the perfect amount of time to see what we really wanted to whilst avoiding Jordanian border costs and even getting a day of relaxation before commencing our long bus journey back to Tel Aviv before our flight out. Our three nights consisted of a day and night in Petra, a pool day in Petra and night in Wadi Rum, and a beach day and night in Aqaba before heading back to the Wadi Araba border.

We didn’t look into hiring a car in Jordan but to be honest with the little time we were planning on spending in the country, as well as what we were planning on getting up to, it didn’t seem like it would be that worth it. After crossing the border into Jordan from Israel at the Wadi Araba border you are met by the taxi mafia. They do not like you grouping up to pay less on taxis and they charge more than the standard fare posted on the billboard right next to the border office. We didn’t actually take any of these taxis as we’d met a Brazilian couple who asked if we wanted to share the trip to Petra. Their hostel owner was picking them up and agreed to take us along which did cause a bit of an argument with the taxi leader but we just got out of there as quick as possible and all was fine.

The best way to travel across the country conveniently was taxis. I warn you they are not cheap. We got the name of the hostel owner who had taken us to Petra who basically agreed to ferry us around during our time in Jordan for a good price. He took us from our hotel to Petra, picked us up from Petra and took us to our hotel, took us from Petra to Wadi Rum, and arranged for a friend to pick us up from Wadi Rum to take us to Aqaba on our last night. We ended up using the same driver to take us to the border on the fourth day too.

To give you an idea of prices:

Where to stay in southern Jordan

Whilst taxis are expensive, you can stay at 5* star hotels here for a cheap price relative to what I’m used to in western Europe. Bear in mind that in Wadi Rum and Petra you are going to be roaming around desert so you may be in search of a bit of luxury when it comes to accommodation. Admittedly I’m more of an airbnb and hostel gal. I’m down for anything that has a good vibe, is convenient, and is well priced. On this trip I was with a friend who prefers a nice hotel so we both compromised, and frankly in a destination where you’re weary post hours in the desert, I was happy to change my usual habits. The most expensive stay was in Wadi Rum where we stayed in a luxury bubble. It was a once in a lifetime stay and well worth it for the experience. We ate in our hotels during our whole stay in Jordan and I must admit I wasn’t very impressed, but hey, I didn’t go to Jordan for the food!

We bought just enough dinars (around 13-15 JOD) on the Israeli side of the Wadi Araba border to get us a taxi to Aqaba. We only exchanged this much because the rate was pretty bad. The original plan had been to get a bus from Aqaba to Petra to save some money but of course we were lucky in bagging a car straight to Petra. We told the driver we needed to exchange more money which he did for us in the car at a better rate than the border. We kicked ourselves a little bit when we got to the hotel though, as it had a near perfect rate which usually isn’t the case at hotels. Lesson learned: change just enough for a taxi first chance you get, and then exchange the rest of your money at your hotel in Jordan.

Read about the procedure to cross the Wadi Araba / Yitzhak Rabin border when you enter Jordan from Israel.

How to cross the Wadi Araba border

One thought on “Jordan (south)”