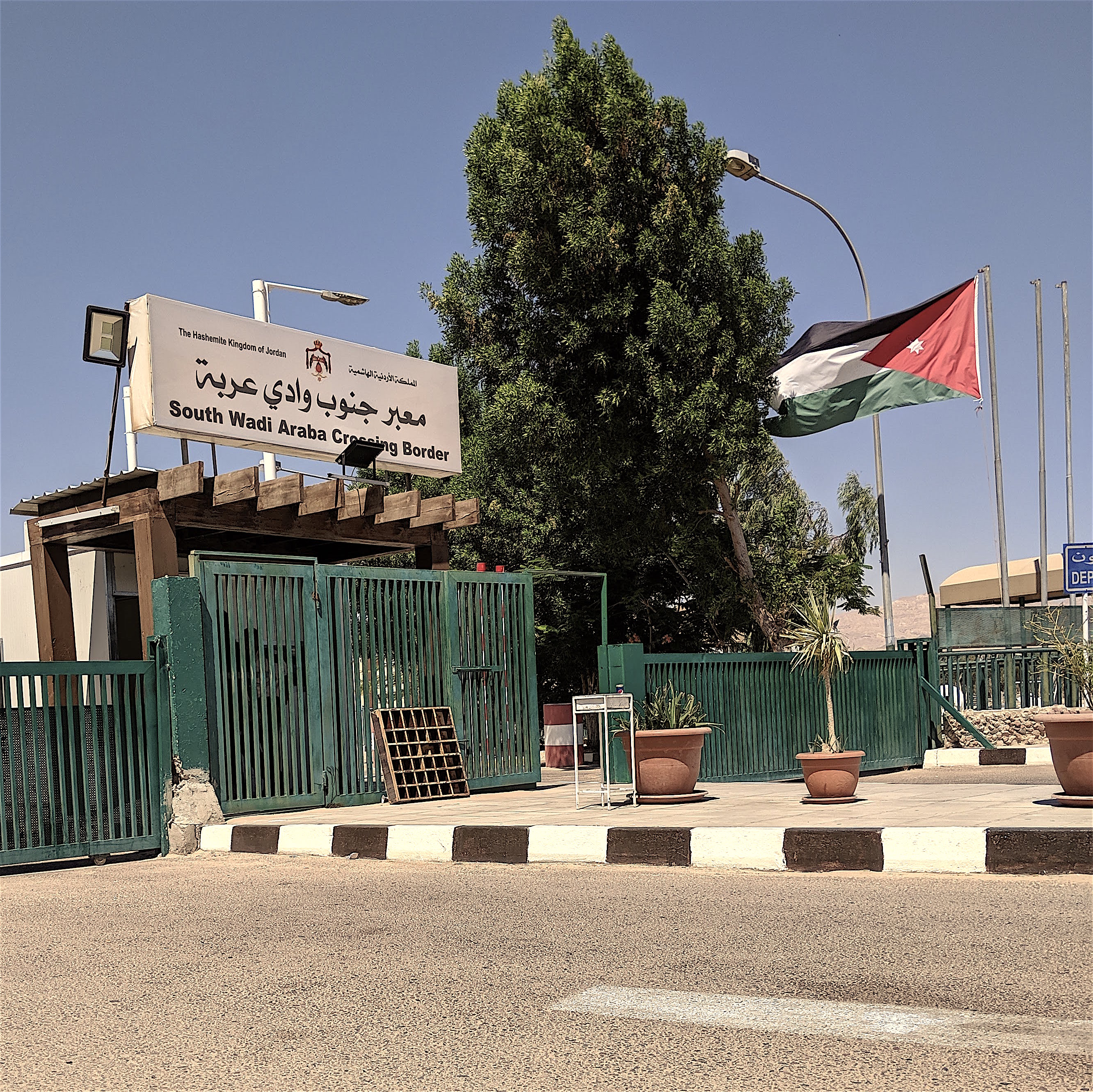 Use this guide to straight up walk into Jordan from Israel with zero stress!

How long to stay: Stay 3 nights in Jordan to pay no fees to Jordan
Why to visit Jordan from this border: Petra and Wadi Rum
Transport: Beware the taxi mafia at the Jordan border
Go with: A group if you want to pay less per person on taxis, or join up with people before crossing where the taxis can’t see you

Get to the border via taxi or alternatively there is a bus that leaves you close. First, go to the cashier and pay your exit fee to Israel, taking the opportunity to exchange a small amount of money (very small as the rate is crap) for you taxi on the other side. Go through a couple of passport checks on the Israeli side (have your entry ticket with you) and exit Israel!. Walk straight to Jordan!

The Jordan side is simple. Enter a hallway with offices and go to the officer you are directed to. They will check your passport and give you a slip to fill in with your details which they will stamp. Do not lose this as you need this to leave. You shouldn’t pay anything upon entry, only upon exit if you don’t meet certain conditions.

Similarly to entry, go to the officer you are directed to and give them the slip you filled out upon entry (get this stamped at Petra). We had stayed in Jordan three nights and had gone to Petra so we were not eligible to pay the visa or exit fee. If you are eligible to pay anything go ahead and then pass through to the Israeli side. Here you will wait in line for a luggage check which can be rather slow. We left Jordan relatively early thinking we’d miss the crowds as we wanted to get a bus from Eilat all the way to Tel Aviv sameday. We were wrong though and were met by a long wait on the Israeli side for baggage checks so leave some time for the crossing (1-2 hours). Following this, go to passport control and obtain another entry ticket (I just kept all those I’d received during my time in Israel as a precaution). After passport control you pass through into Israel to find taxis waiting.

Unfortunately, although I was charged nothing when arriving to Tel Aviv’s airport or when I re-entered Israel post my short visit to Jordan, there is a fee to pay when you leave Israel via the Yitzhak Rabin border. Israel charges 101NIS each to leave which we hadn’t been aware of when we made the crossing (thankfully you can pay with card).

The Jordan Pass is a package you can buy before entering Jordan that acts as a visa fee waiver and a ticket for entry to Petra. Everyone online seems to recommend getting it, however, it really depends how long you want to spend in Jordan and visiting Petra, otherwise it may not be worth it (it wasn’t for us). The Pass has three packages: 70JD for one day’s, 75JD for two consecutive day’s, and 80JD for 3 consecutive day’s entry to Petra. This is really the only differentiator as you get free entry to more than 40 Jordanian attractions, free downloadable brochures, and the tourist visa fee waiver (only when you stay a minimum of three nights) with all three.

When to opt for the Pass if crossing into Jordan via this border:

If you want to see some of the other 40 attractions included in the pass, and will stay in Jordan at least three nights. Your visa fees will only be waived if you stay at least 3 nights in Jordan. Without the Jordan Pass entry to Petra is 50JD for 1 day, 55JD for 2 day, and 60 JD for 3 day entry. If you want to see some other attractions, the Pass is a good deal. Bear in mind if you are going to stay three nights in Jordan coming through the Wadi Araba border you wouldn’t pay anything upon exiting anyway so the Pass is essentially a ticket bundle.

When to not opt for the Pass if crossing into Jordan via this border:

If you are going to Petra but do not have time or interest in visiting the other 40 attractions included in the Pass. We were originally going to stay two nights in Jordan: one night in Petra, and one night in the Wadi Rum desert. We actually extended this because if you stay three nights you don’t have to pay a 10JD departure tax. Add to this the fact that accommodation in Aqaba is much cheaper than Eilat (we were going to have to spend the night in one of these two) and you’re onto a double winner.

Long story short, if you stay two nights in Jordan and visit Petra you don’t pay the 40JD visa fee, but if you extend to three nights or more, you also don’t pay the 10JD departure tax. Make sure to get your Jordanian entry slip stamped at the Petra ticket office. They won’t remind you, so remember to ask! I’m not 100% sure if you won’t get you fees waived at the border if you don’t have this, but why risk it! We ended up only paying 50JD each for our Petra entry, saving 20JD by not getting the pass. It is an almost free trip to Jordan if it weren’t for the Israeli charges.

Transport to and from

Get to and from the Israeli side by taxi, Gett taxi, or by bus. We made friends with some Israeli guys at our accomodation who offered to drive us so feel free to try that too if you are feeling charismatic.

Get to and from the Jordan side by taxi. There is a taxi mafia so they will charge you more like 15JD to Aqaba although the official rate is 11JD. A taxi to Aqaba from the border or vice versa at 10JD is a good price. We met a Brazilian couple at the Jordanian side waiting for the owner of their hostel to pick them up and joined them to go directly to Petra rather than stopping at Aqaba first. The taxi guys were not happy and came over to argue as they’d seen we’d grouped up! Ride sharing saved us time and money with the trip to Petra costing us about 30-40JD between the two of us. Grouping up is a way to pay less per head but group up before crossing where the taxi drivers can’t see you if you are going to do this.

We exchanged just enough for a taxi to Aqaba on the Israeli side of the border. Obviously our plans changed and we ended up taking a car straight to Petra. We asked the driver if we could stop somehwere to exchange money on the way to pay him and he did the exchange in the car at a decent rate. Only when we got to the hotel did we kick ourselves as (oddly) it had the best rate we had seen. Advice: exchange just what you need for a taxi from the border and exchange the rest at your hotel.

The main reason for any tourist to cross the Wadi Araba / Yitzhak Rabin border is to visit Jordan.